On July 26th, Center City Public Charter Schools was awarded a grant from the Office of the State Superintendent of Education to share its effective ESL After the Bell program with H.D. Cooke Elementary School, a traditional public school. The program has helped English Learners (ELs) at Center City learn English and succeed academically. Specifically, in the 2015-16 school year, English Learners approached or met expectations on the state assessment (the PARCC) at a higher rate than EL students across the District of Columbia in both mathematics and English/Language Arts. As the District of Columbia educates a growing number of English Language Learners, high-quality programming to help students learn English will be critical. Between the 2011-12 and 2016-17 school years, DC experienced a 44% increase in the English Learner student population. 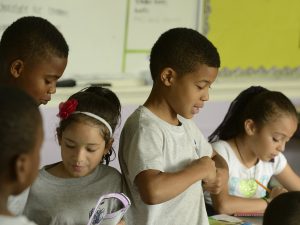