Both teams held their own, but Petworth pulled away in the end to gain the victory and take home the trophy. The final score was 14-26. 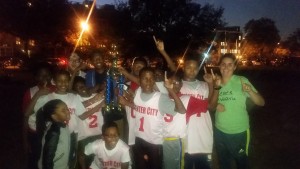